We have 2 units in our Sydney Warehouse available for immediate dispatch.

A large-sized rechargeable battery pack for your Raspberry Pi (or Arduino, or Propeller, or anything else that uses 5V!). This pack is intended for providing a lot of power to an GPS, cell phone, tablet, etc but we found it does a really good job of powering other miniature computers and micro-controllers. If you want something a little smaller, we have a 4400mAh power pack with one USB port that can provide up to 1A We tested it with an iPad mini, iPad 1 & 3 and iPhone 5 & 5s so we know it will charge those models.

Inside is a massive 10,000mAh lithium ion battery, a charging circuit (you charge it via the USB cable attached), and two boost converters that provide 5VDC, 1A and 2A each via a USB A port. (The markings indicate one is good for 1A and one is good for 2A) The 2A output is best for charging tablets or other really power-hungry devices. But either can be used for when you want to power a Beagle Bone or Raspberry Pi, wifi adapters, maybe even small displays. We hooked it up to a 2.5" NTSC display (powered from the Pi's 5V breakout lines), wireless keyboard/mouse and a small WiFi dongle and it hummed along just fine as a mini computing setup!

The charging circuit will draw 1A from a 5V supply (plug a microUSB connector into the pack and then to a computer or wall adapter). You can charge and power something at the same time but the output switches to the USB input when charging so the output voltage may fluctuate. Its not good as a 'UPS' power supply for an embedded linux board, although microcontrollers like Arduino may not care about the voltage drop as much. Also, there's ~80% efficiency loss on both ends so if you charge it at 1A and draw 1A at the same time, the battery pack will eventually go empty. However, if you're powering something thats 500mA or less, you can keep it topped up no problem. Also, when you start and stop charging the pack, it will flicker the output, this can cause a 'power sensitive' device like the Pi or an iPhone to reset on the power supply. If using it with a low current load, say under 100mA, the pack may 'fall asleep' - you can use this circuit to keep the pack awake

How long it will last depends a bit on what you have connected. We ran a 'headless' pi (no keyboard, mouse, display attached) with a mini WiFi adapter plugged into the USB port and pinged it once a second to keep the network connection from going to sleep and it lasted 15 hours. There is a 4-step LED charge status display which you can turn on/off with the button. However, the button is not a general on/off for the entire pack! There's no way to turn off the pack, as long as something is plugged in, it will power it. If you need a USB power switch, check out this item

Comes with the battery pack and a micro-B cable that you can use for charging the pack or powering a device with a micro B port. 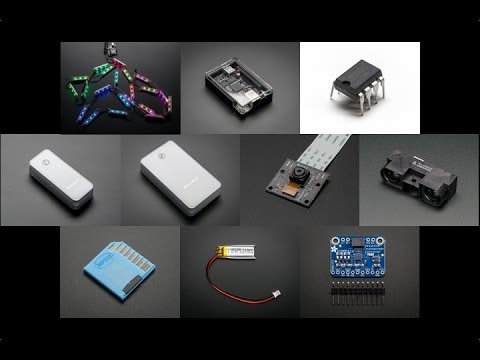