Use Android, Bluetooth and Arduino to control RC Cars

The team at MOBOT have create a way of controlling remote-control cars using Arduino, Bluetooth and an Android device. They modified the toy car with the addition of an Arduino and bluetooth module. This receives instructions from an Android device via bluetooth that is running their free Android app. The app uses the Android phone's accelerometer as a steering control, and the functions also control the direction and car lights. For example:

As another example of Android-controlled Arduino boards, this one is a success. You can also control other Arduino systems, as the Android app is basically controlling Arduino digital output pins. For more information, app links and more visit the MOBOT project page. And for more news, updates and items of interest.please follow us on twitter, Facebook and Google+.

To get started with your own Arduino/Bluetooth interaction we have a range of Bluetooth devices including the Bluetooth Bee, which connects to Uno-format boards with a simple XBee shield: 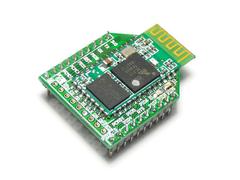