Build your own secondary iPod display

Christopher Monaco's girlfriend asked him for a better way to view her iPod display while driving - and he devised a great solution using a large LCD, custom hardware and the PodBreakout system. The resulting control device can display song information, and also allow track changes and play/stop music. Something like this is also great as it allows you to keep your eyes closer to the road instead of squinting at the iPod screen. For example:

So instead of upgrading your car to one with iPod connectivity, build this display instead by following Christopher's instructions here. And for more news, updates and items of interest.please follow us on twitter, Facebook and Google+.

To build your own iPod controller, apart from a range of graphical LCD modules, mini Arduino-compatible boards and buttons - you'll need the PodBreakout package: 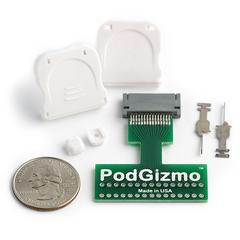 This will save much frustration as it brings out all the connections from the iPod dock connector into a simple PCB with 0.1" pin spacing. Combined with the Arduino library, you'll be on your way to iPod controls in no time.